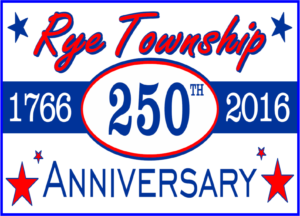 Rye Township celebrated its 250th Anniversary in 2016. Created in 1766, Rye Township is the third oldest Township in Perry County. Rye is actually older than Perry County, which was formed in 1820. The area associated with the “southeastern” quadrant of current day Perry County was known in 1766 as Tyrone Township, Cumberland County. At the January 1766 session of the Court of Cumberland County held in Carlisle, a petition was presented asking for the erection of a new township out of the lower end of Tyrone. Below is the order issued by the court on March 25, 1766:

“Upon petition of several of the inhabitants of Tyrone Township to this
Court, setting forth that Said Township is too large, it is adjudged and
ordered by said court, that from the North Mountain to the Tuskarora
Mountain by Mr. West’s, and from that Darlington’s and to Strack the
Tuskarora about William Noble’s be the line, and the name of the Lower
be called Rye Township.”

The Historical Society of Perry County reprinted an article from the May 22, 1907 edition of the “Perry County Democrat,” where it states that the total inhabitants of Rye Township in 1766 were approximately 42 residents. Unlike today where the higher density of population is located to the eastern end of the Township near Marysville Borough, the earlier settlements began in the western end of the current day Rye Township with the first land warrant of 312 acres by Hartley Wormley in 1792 in the general vicinity of what is now known as the Village of Grier’s Point and Keystone.

The area that became Rye Township was a part of Penn’s woods with vast areas of wilderness inhabited by wolves and bears, deer, and yes, Indians. Many early settlers worked very hard to manually clear this land to build their homes and farms, raise their crops and survive the harsh conditions. When Rye Township was created by political subdivision in 1766, King George III was the King of Great Britain. The United States as we know it today did not exist. The thirteen colonies were formed with Pennsylvania being 12th. There was no U.S. flag as we know it today, no president, no electricity, no postage stamps, and no Star Spangled Banner being sung when Rye Township was created.

Haines History records that regular roads were laid out and built around 1800 by the early settlers on trails blazed by the Indians. The first dirt roads were muddy, full of ruts, which made travel difficult, especially after a spring thunderstorm. Other items of early development noted were:

Rye Township has come a long way in 250 years. The year 2016, was a time to celebrate this special milestone, to reflect and give thanks for those who have gone before us. It is a time to remember our history so we can better appreciate all that Rye Township is today and gain a vision for what we can become in the future. Let’s work together so that Rye Township will continue to grow and prosper well into the 21st century.

Enter your name and email address to receive our newsletter via email.