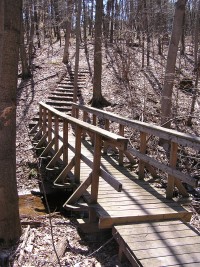 Weaver Park is a small natural area located in the Leewood Village subdivision in Rye Township, situated at the northwest corner of the intersection of Lone Oak Drive and Reed Drive.

The Park consists of approximately 4.24 acres, being Lot No. 8 of the Leewood Subdivision.

The property was deeded to Rye Township in the 1980’s when the land was developed and subdivided and was named in memory of Jim Weaver, a Township resident, who was killed as a result of a construction accident.

Weaver Park includes a nature trail, which is accessed off of Lone Oak Drive, near the Reed Drive intersection.

In 1998, a footbridge over the small run which flows through the park, and 2 smaller footbridges, were constructed through the efforts of Dan Vodzak, an architect and nearby resident in Leewood Village.

In 2005, significant improvements to the trail, including upgrades to the small foot bridges, installation of steps at the trail exit on Lone Oak Drive and on the incline on the west side of the bridge over the run, and installation of park benches along the trail, were accomplished as a result of the Eagle Scout project of Township resident, Ryan C. Fawver.

As with the township’s Community Park on New Valley Road, Weaver Park is available for use from dawn to dusk, year-round.

Enter your name and email address to receive our newsletter via email.